No, It's Not Caturday (or: Everyday is Caturday!)


Lucy is cat number 3. But really she is my favourite cat (don't tell the other cats, they all think they are the favourite). Lucy is two now and these are kitten photos.  She is very cute in them, but in reality she was kind of weird looking.  When she first woke up from a nap she looked very like Sid the sloth from the Ice Age movies. (sorry, you have to look that up, I don't feel like looking for permission to post Disney pictures) 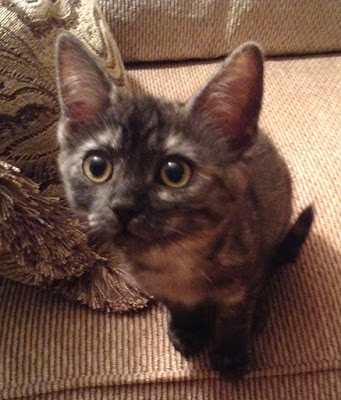 Lucy is always hungry. And she is up to try anything you are eating. Breakfast, lunch, dinner, meat, veggies, fruit, whatever; Give her some! Once she has tried stuff she leaves you alone. Except for ham and Doritos. She always wants more ham or Doritos. And she is smart.  If I don't get up shortly after the coffee pot starts doing its thing in the mornings she will either get up on my dresser and start chucking stuff on the floor or go in the bathroom and knock over the stainless steel wastebasket (why do we have a stainless steel wastebasket?).

Lucy taught me to play fetch.  When she was a kitten, what she really wanted was to learn to knit. When I was knitting, she wanted, nay, she NEEDED to inspect yarn, needles, tools, knitting bag; NEEDED to be on my lap (she is not usually otherwise a lap cat),  NEEDED  to read the pattern, taste it, sit on it. She was an impediment to a relaxing pastime, frankly.  One of her toys is a plastic  spring coil from a coil bound book. It happened to be nearby one early morning when I was trying to knit and so I tossed it across the room. She launched after it, and damned if she didn't bring it back on the run.  So I threw it about a dozen times. She raced after it and brought it back to me lickety split and looked eager and expectant each time. After a dozen times she walked the spring back to the couch.  And after another half dozen throws she dropped it on the floor out of my reach and curled up on the cushion beside me and went to sleep. It was a bedtime routine for months. Now she brings me the spring in the middle of the night or the early morning, and occasionally when I am feeling blue.

Meili was 2 when we got Lucy.  We thought Meili and cat number 1 would be companions but cat number 1 wanted nothing to do with Meili and we thought she was lonely. So we got her a kitten.  Poor Lucy. She was fascinated by the big cats, but cat number 1 ignored her completely and Meili followed Lucy around and made threatening noises at her constantly. For two weeks. Then, one evening Lucy was playing in a nylon tunnel toy, amusing herself, and Meili came flying across the basement, tumbled Lucy through the tunnel and they have been friends ever since. 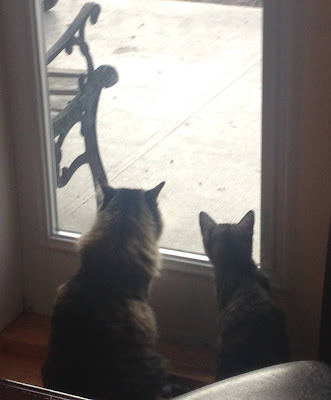 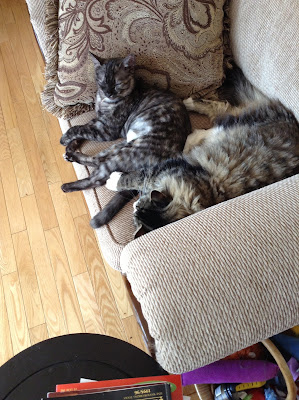 We think the addition was ultimately successful. This nap will eventually turn into a bath(ing each other) and then it will turn into a wrestling match, back into a bath and then back into a nap.  They are pretty amusing. Which is a good thing. I seem not to be much amused lately, but I am trying.
at 13:35