Caturday in the Giant Metropolis

Last weekend I had a small holiday. Beloved was working on the Capital Island, in a city where I don't really know anyone. So he left me with the Offspring for two days in the Giant Metropolis. After two days  I took the ferry to the Capital Island and Beloved and I drove north to a small city where we have friends. We came home again last Tuesday.

When we are together, the Offspring and I generally make things, talk about making things and look at tools and supplies for making things.  We also eat, and sometimes cook. Last weekend we also attended a play directed by someone I met through my theatre. When the offspring and I are at her house, though, we are attended by the handsome and clever Stanley. 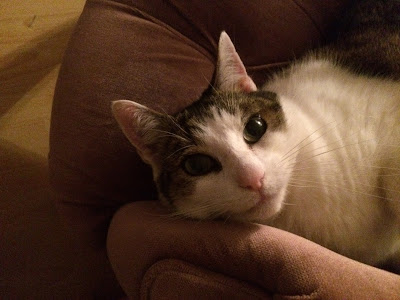 Stanley chose the Offspring at a rescue in Halifax when she was a student. She went to the rescue intending to get a kitten, but the adult, worldly and adventurous Stanley climbed into her open backpack and her heart. He was 2 or 3 when she got him and they've been together for 5 or 6 years now.  While in university, the Offspring made her summer living by cooking for tree planters. She would leave great suitcases of clothes and books and sewing and knitting projects at my house and go off to the bush for 4 months.  One summer Stanley stayed with a friend in Halifax because the schoolyear apartment was to be given up, but after that, lodgings, and more importantly, roommates were kept over the summers and Stanley did not need to be uprooted.  Which is not to say there were no moves. Stanley is a veteran mover.  The offspring stayed in Halifax for a year after graduation, but then decided to come west and settle for a while in the Great Metropolis to the South. Before she did, however, she worked one last long season in the bush. She and Stanley flew out with everything they could get on a plane and they both stayed with us until the home in the GM was found. The Offspring actually left Stanley with us for nearly a year while she got established in the Great Metropolis, and also until she could manage to fly him home rather than subject him to a 9 hour drive. 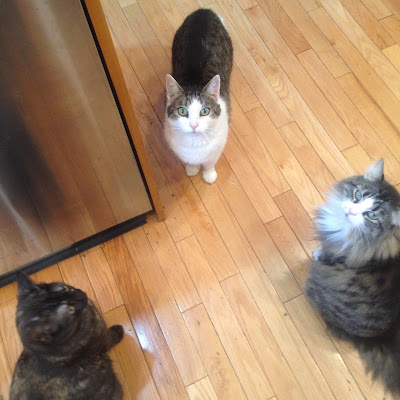 Stanley was a fine addition to our collection of cats.  He was utterly indifferent to the three cats we had, eschewing all overtures completely.  But he liked human company and would sit nearby and purr and accept any and all pets and scratches. He is the only cat I know who tolerates, and even seems to  like belly rubs.  He also likes to converse. 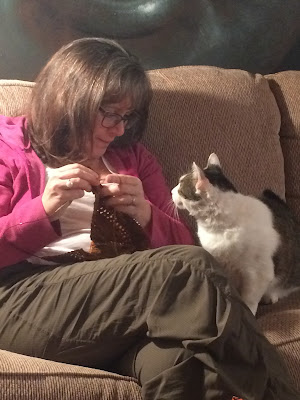 We missed him a lot when he finally moved south to live with The Offspring again, but Stanley remembers us and when we go to visit The Offspring, he comes to the door to greet us and behaves affectionately. He has excellent manners and also comes to see us off. It is very endearing.

Next Saturday: Cat Number One.