All I have been doing for making things is building a set and knitting socks.

Here are some construction pictures of the set. I worked on it in between hospital visits.  It was good to have something to occupy my hands and my attention sometimes, but they were wonderful at the theatre about letting me work whatever hours I wanted and taking off at a moment's notice when I needed to.  Beloved worked on the set with me too. He is also a carpenter and I worked some evenings and weekends and he came along and helped. It was not really a one man job, this particular set; the arch at the back is 8 feet high, but the panel on the far left and right are 9 feet wide and 15 and 16 feet high. 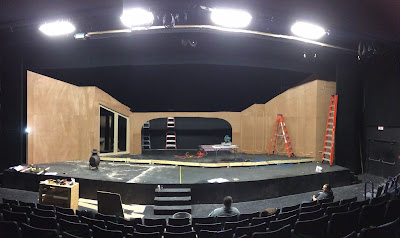 Completed walls and the mouldings going on the wall. I never work on the trim. We have a couple of guys who come in after the main construction is done and they do trim and also run a/v and light cables and things. 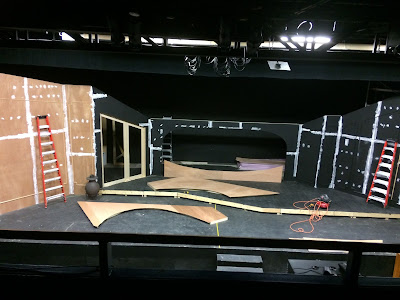 The set has a bit of roof.  These are the pieces of it, and also the base coat of paint on some of the walls. 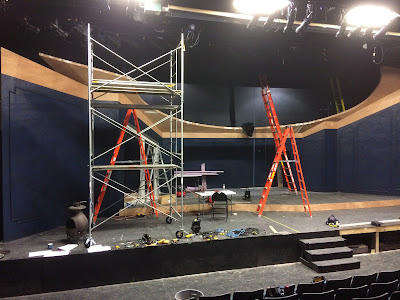 This is the roof up and the beginning of the crown mouldings as well as the final colour of the walls.  It is also a mess. I made a mess that day.  Some days that is all I do is make a mess, but on this day I also installed a roof and cut weird crown mouldings. Weird because the set is designed with a forced perspective, so the angles are a bit challenging. As I told the designer after it was all done, I like a challenge, although sometimes not while it is happening. 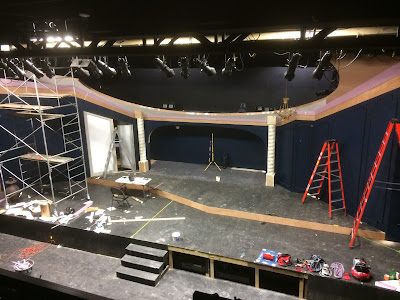 Here all the trim is up and the columns on either side of the arched opening are in place. The painter has also started the wallpaper that covers the roof panels. It is still a mess. 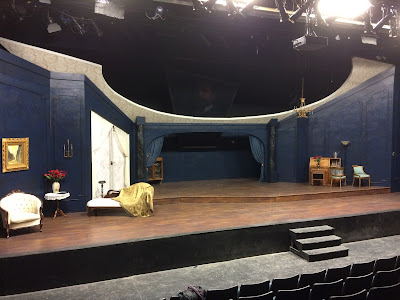 This is the finished, painted and mostly decorated set. The bookcase you see peeking out at stage right of the archway (which is on the left) will be fastened in the centre of the archway. For the first scene there is a piano in front of the bookcase. 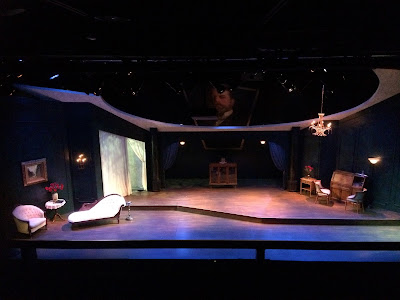 And here it is finished and lit.  It's quite elegant, I think. There is a nice little pot bellied stove to the left of the white chair that I cannot seem to get in one shot.  I might try to get some shots sometime when I have the theatre to myself before the play is over.  It's hard to take a good picture of it; it's very wide and so hard to get the whole thing in one shot. I joke that it is so wide it probably has two official languages.

I knit socks while I was at the hospital and hospice with my dad.  I can knit socks without a pattern and they are small and portable, so I nearly always have socks to take places with me.  I knit five and a half pairs of socks at his bedside. 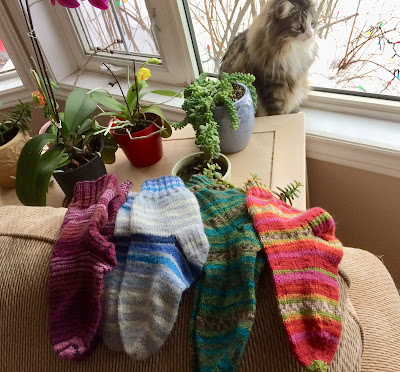 The other two pairs are in the Great Southern Metropolis with The Offspring and her Boyfriend.

During the run of the play,  I operate the sound and light boards. There are about 90 light cues in a 130 minute play, and about 50 sound cues, so I have some idle moments in the booth. So I knit in the booth too. Again, just socks because I can do them without thinking and frankly, I am not up to anything complicated right now.  Since the play opened on February 16 I have knit two pairs of socks. 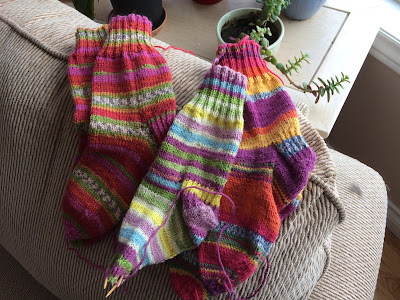 Yes that is two and a half pairs, but you will notice there are two of the patterned socks on the left of this photo and only one of the same sock in the photo above. One of the pairs spanned hospice and the play opening.

It's a good thing that my life currently consists of pushing a button when my stage manager says, "go," and knitting, because I am not really functioning all that well.  Maybe I will write about that soon.