I make things.  I used to draw and paint and when I was 10 my dream was to go to art school. But my parents said art was not a job, and I needed a job. And I believed them. Even when I went to high school and took art classes and met art teachers, whose jobs were art, I believed that art was not a job.    It's possible there is a connection between all of that and the fact that I have been depressed most of my life.  Of course, I may just have abnormally low iron, too. Who knows?

Last year I somehow got to help a local painter with a backdrop for a theatre production (different theatre group than I am working for now) and I kind of felt like I was breathing again after a long time.  I mentioned to the director of the play, who is also a friend, about my parents teaching me that art was not a job. He said the most amazing thing. He said, "maybe art is not a job, but sometimes it is a life." Every once in a while someone says something that takes your breath away because it is so true.

And it occurred to me, about that time, that art has managed to seep out of me, in spite of it not being an acceptable life to my parents. I make things. I can't help but make things. I knit and sew and I have some silversmithing tools and I make silver jewelry sometimes. And I build things. And I have to try stuff all the time, like making my own hand lotion bars.
So now  I am going to try to work at making something every day.  And on Mondays I am going to post what I made last week, or last month or last year.  I am going to post the stuff I make on Mondays.  Last week I knit some socks and some gloves, but I have no pictures of those. I also built half a theatre set, of which I do have a picture. 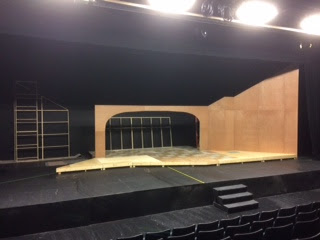 So Caturdays and Mondays toward the resurrection of a blog.  And in the interest of getting me interested in something again. Thanks for coming along.