Good heavens! I have now written more posts this year than in the previous two years combined!  Thank goodness I have a lot of cats.

Meet Meili. According to Google translate, Meili is the simplified Chinese word for beautiful. 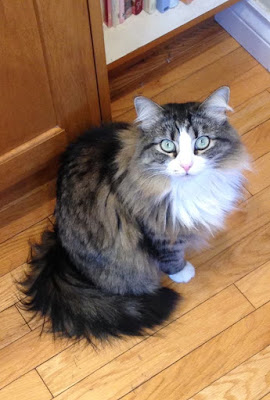 I mentioned last weekend that Cricket is not our most therapeutic cat.  Meili is.  If you are feeling bad it is Meili who will come and enquire as to the reason for your tears.  She is very purry and affectionate. She is also kind of the house mother. She needs to know where all the other cats are and what they are doing before she can relax. She has a busy, inquisitive look sometimes that I have never been able to capture. She will crane her neck in all directions, looking around when there is some air of cat activity that I cannot discern with my puny human senses, and I imagine her saying, "What's all this? What's happening? What's going on honey?" a al Karen Walker in Will and Grace.  She is much less selfish than Karen, but she does have a weakness for cat cookies.

Currently she is spending a lot of time asking me what is wrong because, of course, I am crying much more than usual.  Dad has been in hospice for a week. Last Thursday, when we got word that there was a bed in hospice, he looked terrible. He was grey and wan, and oh so thin. I thought he would not last the weekend.  Friday morning, after he was whisked into his hospice bed, washed of the hospital smell, and tucked under a beautiful blue handmade quilt, he was ever more relaxed and his colour was better.  On Sunday, when I walked into his room, he was sitting up, eating ice cream and watching tv, he even had an air of cheer about him.  He had stopped eating in the hospital.  Dad has always had a thing about eating everything on his plate. It is just one of the things he has never shaken off from his childhood (desperate, irrational fear of doctors and hospitals is another). In restaurants, for the last several years he has greeted plates delivered to him with horror that he must eat so much. Now, if you give him too much,  he refuses it completely, even if he might want a few bites.  Hospital meals were all too much, and sometimes comically so.  One night, I swear on my cat's lives, there was a cup and a half of peas on his plate.  Please. I like peas and I don't want a cup and a half of them with a meal. Well. Unless they were picked and shelled before they were steamed. Then a cup and a half of peas might be all I want. But these were frozen peas. Sent from Ontario and microwaved before they got to my dad; there was nothing appealing about them.  (ha!)

Speaking of peas, when I was a child, dad contrived a game to make us eat our peas. He would estimate how many were on our plate, and we would count them as we ate them to see if he was right.  He did it for years, and he got really accurate. We always ate all our peas, too.  Of course, we ate everything on our plates, because that was what you did.  Nights when we had peas, we also had the song about peas, "I eat my peas with honey; I've done it all my life. It makes the peas taste funny but it keeps them on my knife." He probably let us put honey on our peas at least once in honour of the song.

Meiji doesn't like peas. Or any human food. She seems perfectly content with kibble, and occasionally has a few bites of canned food, which the other cats get morning and night. She likes cookies and she is quite demanding and insistent about them.  Some days we cave to the pestering, other times not so much. Meili is also the house murderer. She is our fat cat, but she is lightning fast and a stealthy hunter. I read last year that bird's eyesight is better than their hearing and that they particularly see bright colours.  Cat colouring is usually camouflage, which is why birds don't see them in time. I tied a bunch of strips of brightly coloured quilting cotton to her collar. She looked like she was wearing a ragged Elizabethan collar. At first she was mad, but she is also dreadfully vain and  we were able to convince her that she was very pretty, and then she wouldn't let us take it off. It worked: she was not able to catch birds. 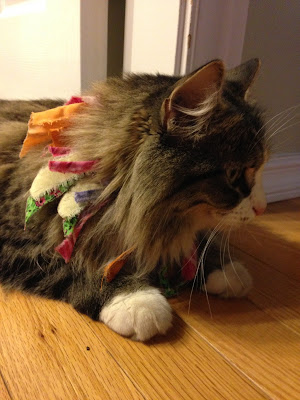 Meili does not have as many nicknames as the other cats. She is our second cat, so she is sometimes called Two, and we call her Kitty Girl and Pretty Girl, and I sing her a song with her name in it that goes to the tune of "Make it Go Away" by Holly Cole. Meili comes to me whenever I sing.  She is gentle and very snuggly, but on her terms, as most cats.  She really does make you feel better, which she managed to do this morning  just by me  writing about her.

Have a happy Caturday.