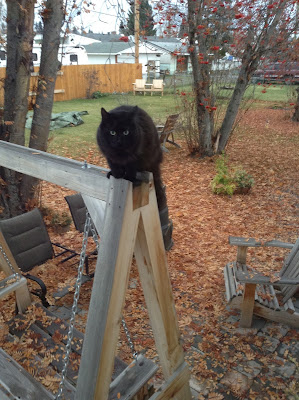 That is the inimitable Cricket. Cricket is a year old. I adopted her from a family with small children whom I think pulled her tail and mauled her. She is very particular about being touched (only on the top of the head and the chin, thank you human) and it took about six months before she raised her tail off the floor.
My dad has always described a particular kind of jumpy, manic behaviour as being like "a flea on a hot griddle."  He had a customer years ago, when he was selling doors and windows, whom he described that way. Some time after, when I had become a carpenter, I learned that this particular man had a strong liking for cocaine. We don't know if Cricket likes cocaine or not, because it's not a thing we have around, but like most kittens she certainly bounced around like she had been snorting the stuff by the bushel. "Flea" seemed an inauspicious name for a pet, and so we settled on Cricket. We also call her 4 because she is our fourth cat, Bunny because she is a clumsy dumb bunny and Lux because she swans around here in the world's most luxurious fur coat.

That is Cricket doing what Crickets like best: climbing things that are hard to get down from.  And that is the autumn view from my bedroom window. The cat and her expression are also my morning view from March to October. She goes outside, climbs the swing and hollers in the bedroom window.

The cats are a funny distraction from the current sad things happening in our lives.  Dad was moved to hospice yesterday. It is a relief to have him out of the far too crowded ward and room he was in. The nurses were wonderful and kind, but he was sharing a room that was designed to be a private room and it was too near the nurses station. He was hearing snippets of conversations and as he becomes disoriented he thought all conversations were about him. He was getting kind of paranoid.  He is not in great pain, and he is pretty lucid most of the time and still very articulate, as long as his mouth and throat aren't dry. He's been depressed for a long time and sometimes he is really frustrated and angry, and sometimes he wishes with all his being that it would just be over. I have always been close to my dad and it is hard to lose him. He will be 80 this year, though he is very unlikely to make it to June, and this is the way of life, but every day I encounter things I will not get to tell him about some day, share with him some day, ask him about some day. I am trying not to think of him as gone yet, but it's hard not to miss him.  We are also coping with the news that Beloved's mom is in hospital and failing back in Saint John.  She was here for a month over Christmas and we had a wonderful time, so we have something good to hold onto there. We are feeling a little overwhelmed.

While Cricket is not the most therapeutic of the cats, she likes to be near someone. I am the person of choice when there are multiple people here, but mostly she prefers to sit just out of touching range.  As I type, she is sitting behind the computer monitor and occasionally puts a paw under the monitor, or plays with something rustley to remind me she is there. It is enough.