Remember the picture of the snowy tree I posted in April?  Here it is in October. 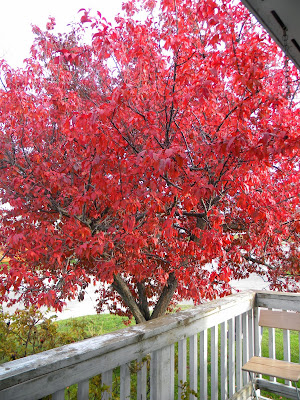 This is the prettiest I have ever seen it.  I have lived behind this tree now for 24 years.  As I said in April, all the seasons are different.  Last fall, it turned an odd milky brown.  This past spring, right after it bloomed (and I put off taking a picture too long) it was attacked by tent caterpillars.  It took a terrible thrashing.  All of its leaves were eaten and the caterpillars were spinning long, strong threads to parachute out of the tree again.  It looked like something out of a horror film.  It recovered.

We had a hot summer.  I don't like the heat; at over 30 degrees I get lethargic and a  heatwave makes me disoriented.  If I remember correctly we had about 8 days all summer with rain. We spent as much of the summer at the lake as possible, and I tried to pretend that all was right with the world, at which I mostly failed on account of I am addicted to newspapers and the CBC.

We had company from New Bruswick for a few weeks in August and we took them to Jasper for a week.   I love seeing people seeing the mountains for the first time.

So now summer is over and everything is back to normal.  The Sea to Sands Conservation Alliance took a bit of a hiatus over the summer, and now is back to showing films and responding to Enbridge and Joe Oliver.

Have you seen that Enbridge is writing poetry these days?  And that they and their government spokesthingies are promising all kinds of advanced technological spill response procedures?

Newspeak.  Don't believe a word of it.

Here is my response to their world-class spill response, which you may have seen me posting elsewhere  as a comment:

I teach fall protection, scaffold inspection and construction and forklift operation.  The main component of all of our courses is safety. We hammer hazard awareness.  While I was researching the curriculum for my scaffold courses, I learned that in the last 20 years, the rate of on the job safety incidents has not decreased.  We have more safety regulations, more policies and processes, more and better safety equipment than we had 20 years ago.  Every industry has a morning safety meeting and everyone in all trades knows what a job hazard analysis is because we all fill one out at least every day, and sometimes several a day.  And yet the rate of on-the-job safety incidents has not decreased.  The one thing that has not changed is people.  We still all go around in our own little bubbles of awareness (or not as the case may be) and we still have myriad things to distract our attention, especially the things we do by rote.  The Enbridge oil spill in Michigan was signalled by their spill response technology, but human error misread the signal, and turned up the pressure, allowing dilbit to spill into the Kalamazoo for 17 hours.  The Exxon Valdez ran aground because the captain of the ship was distracted.  The Queen of the North ferry  sunk near Hartley Bay because someone did not attend to warning signals.  The MM&A train rolled down a hill and blew up Lac Megantic's downtown because humans decided to have fewer engineers responsible for the train and mislabeled the contents of the tank cars.  Stupidity, personal problems, inability to pay attention, greed: none of these things are going to be solved by a world class spill response.

I think the Northern Gateway is a bad idea. I think Line 9 and Keystone XL are bad ideas.  I think expanding the tarsands is not just a bad idea; I think it is a monstrous, disastrous idea.   I have no idea whether we have passed a climate tipping point or not, but evidence seems to suggest we have, and evidence suggests that spewing more carbons into the atmosphere by burning more fossil fuels is going to turn up the heat even more.  If we can invent the technology for a world class spill response, we can invent the technology that doesn't need such a thing.