So.  That time of year again.  This year I received a copy of this: 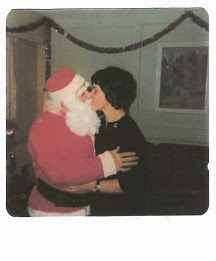 It was taken in about 1970.  That's my mom and dad.  Every year my dad would buy a couple of extra boxes of mandarin oranges and a big bag of ribbon mix candy, and on December 24 he would get into that suit.  One of the other dads in the neighbourhood would take him all over the neighbourhood on a snowmobile (I grew up in Almost The Middle of Nowhere, where a snowmobile was a common method of winter transportation, not just a recreational vehicle.)  At all the houses with kids there would be a gift for each child at the foot of the front porch.  Dad would pick it up on his way in, stuff it into his sack of gifts and Ho! Ho! Ho! into the living room of all the wide-eyed kids I grew up with.  Everyone got a gift, an orange and a bagful of hard candy.  I grew up with the notion that Santa Claus was my father.

I learned to read at 4.  I am quite certain I could not read well enough at 4 to read that famous editorial,  but I remember reading it in ATMON's local paper when I was a little girl.  I vividly remember sitting on our forest green living room carpet, with the paper spread out before me, and reading these words:

"Yes, Virginia, there is a Santa Claus.  He exists as certainly as love and generosity and devotion exist, and you know that they abound and give to your life its highest beauty and joy.  Alas! how dreary would be the world if there were no Santa Claus."

and knowing how right Francis Pharcellus Church was.  My father was Santa Claus.  He was (and is) kind and knowing and generous and helpful to a fault.  I knew that the workshop at the North Pole was a fiction, but I understood with every fibre of my being that Santa Claus was a state of mind.

It's a state of mind that is easy to lose.   Obligations and expectations and commercial manipulation conspire to make it easily the most disappointing and difficult season of all.   Today was our annual union Christmas party for the carpenter's children.  There is food and music and crafts to keep the kids busy till Santa arrives to hand out gifts and candy.  There are about 10 of us that put the thing on, and we can't seem to get anyone else to help.  But Santa said today, before he put on his suit, that it doesn't matter.  The 10 of us care.  We are the ones who organize and participate in all the stuff in our lives, and we like each other and its really for the kids, so who the hell cares if its always just the 10 of us? Today's Santa is a man who has been my foreman on many a scaffold job and I was thrilled to attend his wedding this summer.  He and his wife have the Santa Claus state of mind.  Today, his grandson recognized him in that suit, and his daughter didn't know how to deal with it, so she told him he can't do it next year.  Which is dreary and  kind of breaks my heart, because growing up with a Santa Claus dad (or grandpa) is a special kind of security.  But it's okay, too, because my partner happens to have a Santa Claus state of mind.  So he is going to wear the suit next year.  And I am going to get to be Mrs Claus.

I never could figure out what the big deal was with that song.  Who else would he kiss?
at 08:26