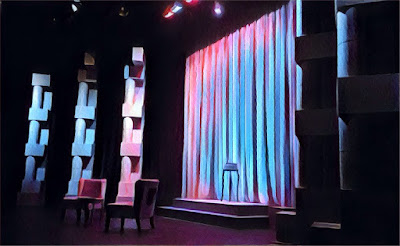 Yesterday was the 20th and closing performance for our last MainStage play of the season.  We presented The Best Brothers by Daniel McIvor.

I loved this play.  It is about two very different  men, brothers, dealing with the aftermath of the death of their mother in a freak accident.  It doesn't sound like it should be funny, but it is. Life is funny and there are funny moments and things to laugh at, even in death.  One of the brothers, Hamilton, is quite straight-laced; an architect, married, he has very little sense of humour or play and his relationship with his mother is strained. He carries a lot of hurt and frustration and he takes it out on his brother.  Kyle is openly gay, a realtor with an ebullient light-hearted character. His relationship with his mother is easy, accepting and his ability to "let her go," as he advises Hamilton in one scene is not hampered by unexpressed needs or wishes.

In the first act, the men learn separately (but in the same scene) of their mother's death, and then are together to write her obituary (yes, it would be wrong to put your business website in the obituary), plan a visitation (blue fancy sandwiches are not fancy, they are weird), host the visitation (where Kyle and Hamilton's grief are never more starkly contrasted) and then eulogize her at the funeral (where all of Hamilton's regrets and frustrations are finally made known, and publicly).  These scenes are separated by each actor donning Mother's Hat, becoming Mother and illuminating the past. Mother is neither watching nor commenting on the current goings on. 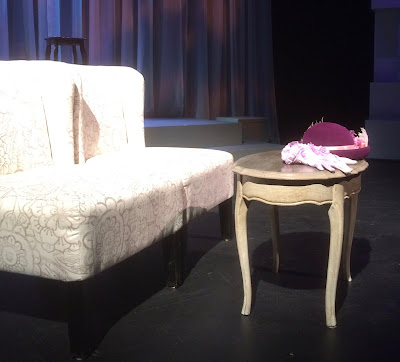 There are two actors in this play, but there are four characters.  Each actor plays a brother, but also the mother. And while the fourth character is central, he does not appear: he is the mother's dog.  The dog is hinted at in the obituary scene and then mentioned and discussed in all other scenes, including Mother's scenes. The dog becomes pivotal at the end of the funeral and is then the subject of the play in Act 2.  Hamilton and Kyle come together again to compose thanks to the people who sent grief (and wishes and prayers), and to read the will. Mother has two more appearances, and Hamilton has a long monologue.  The second act has fewer funny moments than the first, but more growth and catharsis.  We are left feeling hopeful, and maybe, somewhat transformed?

Between the scenes, the lights dim and music plays and the actors themselves move the set around. I think these moments are kind of brilliant; the actors have slight, but telling interactions, and these are the places where their body language says so much.

While I admire all theatre actors to start with, I was astounded by these two men. Hamilton was played by Toronto actor Aidan DeSalaiz and Kyle by Winnipeg actor Ryan James Miller. Watching DeSalaiz work through Hamilton's grief and anger and frustration and hurt, and then to find some release was truly a journey, every single night.  Miller, in the more comic role of Kyle is flamboyantly expressive and  has wonderful timing. He  was hilarious and exasperating, especially when viewed through Hamilton's eyes, but heartbreakingly poignant in gestures, facial expressions and posture.   This was a play, acted by two men from different parts of the country who had not met before the company came together to rehearse. But night after night they were brothers, united in their love for an interesting, adventurous and loving mother, and working through their feelings for her and each other in conversations and monologues. I never once caught a whiff of "acting."  They were saying the things that came to their minds and responding to one another.  That I watched them do it, night after night, and deliver perfect long monologues every performance awed me over and over. I am trying to figure out how to afford to just follow these actors around the country to see everything they do, because I am sure I have only seen the tip of the iceberg that is their immense talent.

I was their tech, and I am almost old enough to be their mother, and I have to say (though it is not my place) I was proud of them every single performance.  For the first three productions this year, I knit in the booth between cues, but I didn't bother for this one - I wanted to catch every word, every gesture, every time. 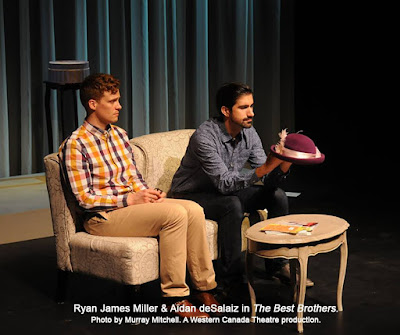 The Best Brothers was a co-production with Western Canada Theatre in Kamloops, where it debuted and ran back in September. The production (and the actors, with their wonderful stage manager, Christine) is heading back to Kamloops for 4 performances May 3-5  at the Pavillion Theatre and then on to Vancouver to the Kay Meek Theatre for 14 performances from May 8 to 19.  If you are nearby these venues, go.  And if you get a chance, say hello from karen.  Tell them I miss them.
at 11:14