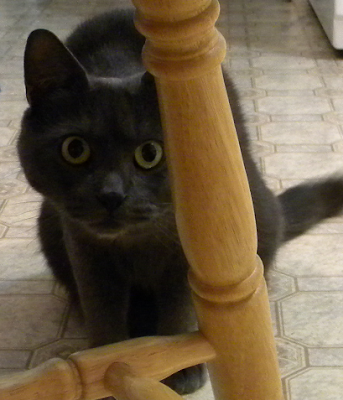 Thomas joined our family in the spring of 2007.  He was the last of a litter of stray kittens hanging around a house where a bunch of The Offspring's friends lived. The friends all moved out and the mom cat and other kittens had found homes, but Thomas was still at the house when it became empty.  So the kid made me go and get him.  He was adorable and playful and loved us all, especially The Offspring.  He loved the dogs too, and Kodi the shepherd/rottweiler became his adoptive mom.  I don't seem to have a picture of this but it was common to find Thomas sleeping between Kodi's front paws. Bandit, on the other hand was afraid of Thomas and Thomas used to like to sneak up on Bandit and hide around corners and ambush the poor dog. Thomas did like Bandit, despite Bandit's terror, and tried to treat him affectionately sometimes. He would often wind around the dog's front legs and rub under their chests affectionately. Kodi liked this display quite well, but the look of abject fear on poor Bandit's face while Thomas did this was pretty sad. 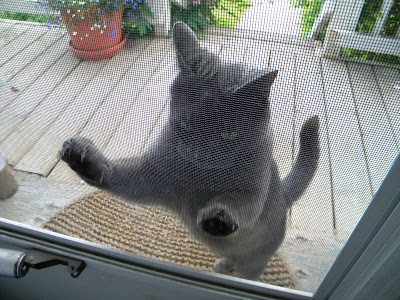 Thomas is a pretty easy going cat. He is not overly demanding, except when a door cannot be left open all the time for him.  In his younger days he was more snuggly, but he is mad at us for getting all these other cats and he is less affectionate.  Years ago, if you were sitting at the table reading, and you put your arms out in a circle, he would climb into the circle and lay down and purr.  He hasn't done that for a long time. 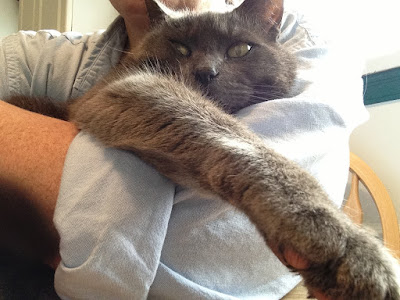 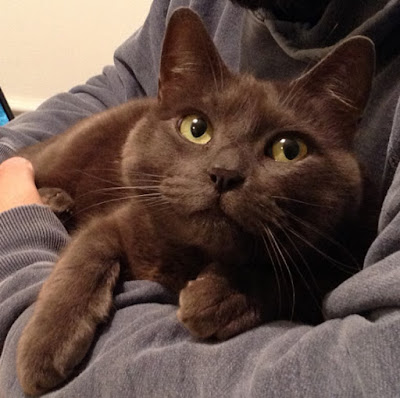 Thomas was bereft when The Offspring moved out the first time, and he has never entirely forgiven her. Shorty after she moved out, my first partner and I broke up and he moved out. He worked away for a few months after that and so the dogs stayed with me and Thomas, but eventually even the dogs moved out. Thomas seemed quite lonesome. In The fall of 2013, we decided to get him a kitten.  I think that kitten (Meili, in fact) would have been fine, except that we made the decision to adopt the kitten's mom, Maggie at the same time. Meili was about 8 weeks old when we brought them home and Thomas was curious, but respectful of her, and they were getting to know one another after a few days of different rooms, when Meili's mom realized there was another cat sniffing her baby. Maggie attacked Thomas and from then on they could not be in the same room.  Thomas found places to hide until spring and in the spring he moved into the greenhouse.  He stayed outside all summer in 2014, coming in only briefly to eat a few times a day. 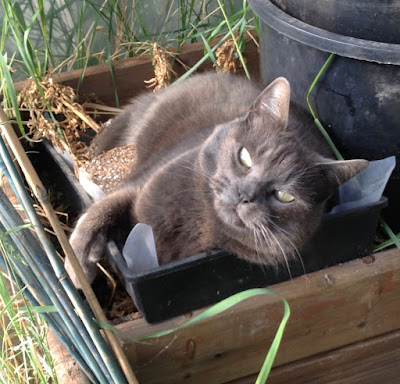 We found another home for Maggie, but Thomas has never entirely trusted Meili, try though she might to make friends.

Thomas found the move from the little old house to our new house four blocks away very unhappy. Most advice tells you to keep a cat inside a new home for three weeks. Thomas paced and yowled for a week before we gave in and took him outside. He gave us the slip as soon as it was dark, and we found him at the old house the next day. We brought him home, and this was the routine for three months: Thomas would mope and yowl for days, we would let him out, and he would go to the old house.  The neighbours all knew him and would let us know when he was back.  We took to leaving him there for a few days at a time to see if he would come home on his own. He never did. We would go and get him and he would eat and sleep at the new house and then leave again as soon as he could.  The house sat unsold for a month after we left, and then the new owners let it sit for another month after that, so the greenhouse was still there for shelter and there were raspberry bushes and bishop's weed and other shrubs to hide in. Once the new owners took over, they tore down the greenhouse and ripped up everything green but the two trees and a lilac. Thomas left us the evening that all of that had happened, and was back before it was light out, calling under the bedroom window to be let in. It was the first time he had come home on his own, and the last time he ever left.

He seldom gets on a lap anymore, but he will snuggle up if we lay down for a nap or go to bed.  He will occasionally go and get Beloved and tell him it is time for a nap.

Thomas hates winter, has a foul mouth and likes to put his toys in the water dish. I often think he should have his own blog.