Jobs and Prosperity (or Round Holes, Square Pegs)

I am in the skills training business.  I work for a growing scaffold company.  I research, write manuals and teach scaffolding.  Scaffold is part of the carpentry trade (except when it is part of the boilermaker's trade, but that is another story), and it is covered in the classroom time in a carpenter's apprenticeship.  It gets a whopping 2 days-max.

This is the kind of thing that scaffolders do routinely these days: 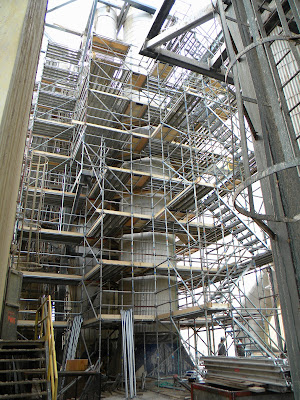 I think it takes more than 2 days to learn how to do this safely.  Of course, my job kind of depends on me believing that, so feel free comment on cognitive dissonance and give me hell...

So we do more extensive training than two days.  Mostly we offer it through the carpenter's union.  But we have recently been approached by some First Nations training providers.  Now, the provider that called us here in BC and offered courses was a private outfit.  They do all kinds of extensive training, including something called life skills and work readiness.  They really screen the applicants for the scaffold training to make sure they have a good shot at success.  We ran a class for them in 2011.  All the students passed and were immediately hired for a local shutdown.  Several of them were called back for subsequent shutdowns. (Generally and historically scaffolding is not continuous employment.  Like all construction projects, the job eventually gets finished and you have to find something else.  Scaffolding is even more short term than framing houses or pouring concrete high-rises.)    Not all of them kept their memberships in the union.  One or two had other trades and work back and forth.  But three of them  have been continuously employed ever since.

Now a First Nations training provider has called from Saskatchewan.  This one has direct involvement with the provincial government and twice we have talked to someone from the Saskatchewan government about what we offer and what they need.  This is my take and my concerns on what we have heard.  There is a lot of potash to mine in Saskatchewan.  I don't know just what scaffolding goes on in mines, but it does because we have a good number of employees working in mines at any given time.  And Saskatchewan apparently has a shortage of people to put scaffold up in mines. But an abundance of unemployed First Nations, also apparently.  So this government rep tells us about a program they had where they screened candidates, sent them to live in a mine camp for some number of weeks, put them in training in the mornings and had them working on the mine site in the afternoons.  In the end I think 3 or 4 of 12 kept at it.  Some quit early, and some finished but didn't carry on.

Personally, I think work camps are a sociological nightmare.  I have never lived in a camp, but I have been a carpenter since 1994, and I have worked with hundreds of men - many of whom have lived in camps and been broken by them in one way or another.  Deep, soul destroying boredom breaks them.  Substances break them.  Marriages break.  Relationships with children suffer.  I don't know a single man who worked in camps, has good relationships with his kids with an intact marriage who didn't have to fight like hell to come back from the brink of disaster.

So I am not surprised at all that this program lost such a lot of its participants.  When you take people away from their home and support, I don't think you are doing them any favours.  But the person we talked to is surprised.  It is good paying work.  Period.  That's it.

I wonder how long we can labour away at this from this precise mindset?  Here is some earth-raping that some far-removed corporation can make money from.  Lets build some kind of huge industrial earth-raping process that will require a lot of man-power (although significantly less manpower than we might use if we did the job in a less mechanical/technical/earth-raping way) and then train people to do these industrial processes, in artificial and simulated communities. And then wonder why society is unwell.

What if it's not the workers who won't behave?  What if the hole we are trying to hammer them into is absolutely the wrong shape and toxic to boot?