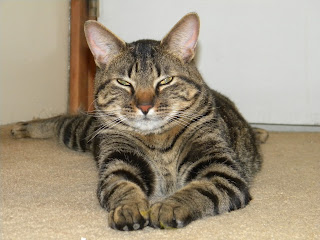 Sammy reached out at me in the pet store. He was reaching and calling and I couldn't hear him through the glass, but he had my heart that moment. I persuaded Don to take him as a housewarming present. Because home is where the cat is, don't you know. Don figured I really bought him for me, which may be true, but Sammy was his own cat. Right from the start he wanted love and attention when he wanted it, and not for one moment longer. He especially did not want his belly touched, which was really hard: 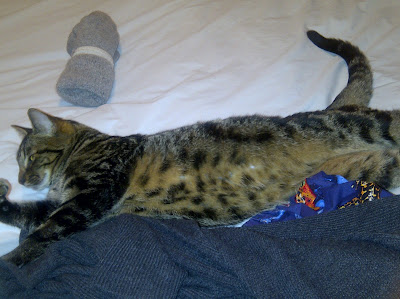 because he had such a soft, spotty belly. Sammy was and 8th floor apartment cat, but he visited my house often and grew to love riding in the truck and the car. 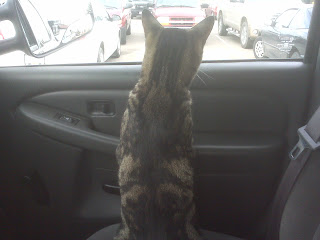 He was taken from his mother too soon and when he settled into bed next to us for the night, he would purr and his little paws would pound the air and he would suckle at his own nipples. He grew out of the suckling, but he never figured out the kneading. He would come to have his head scratched and purr like crazy and his front feet would knead away in the air, sometimes even reaching over his head. He has this great way of coming silently into a room, sneaking up on you and then turning on a roaring purr right under your chair. It was the loveliest surprise.


Sammy loved to play in the grass and climb the plum tree in the front yard. He liked to wake us a couple of times a night, stomping on us and purring. He had a stuffed goose he took to beating up when it was bigger than he was and watching him carry it around was the funniest thing. He had a great fondness for mohair yarn, and he would fish in my yarn baskets looking for a ball to carry around. I loved finding a random ball of mohair where it ought not to be. He had a flair for making an entrance. Somehow it always seemed like he was shouting, "I'm here! Here I am!" I think we will be watching the doors for his entrance for some time.  Sammy left his footprints on our hearts. We will miss him so much. 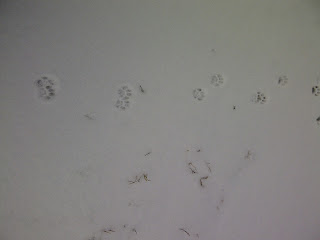