Not Much Between Despair and Ecstasy

I've been transferring my vinyl into MP3 files. That's a line from an old song that I had not thought about for a long time. It's a fun morning wake-up song.   Can you identify it?

Despair is more the order of the day just now. I should like to have to stop meeting a certain group of people in this particular way: 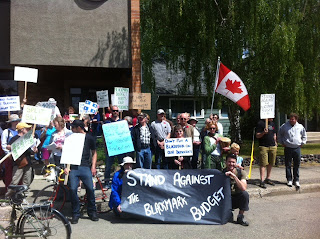 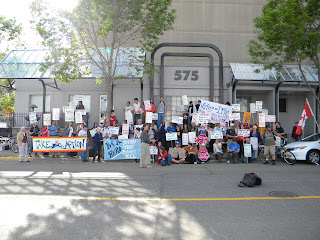 Both rallies were pretty great. It's refreshing to be around a bunch of people who think as I do about the state of our country. One of the participants said she was having a bad day and she felt really discouraged about things but when she stepped out her door (just a block from the protest site) and saw 80 people with signs and banging on casseroles it lifted her spirits immeasurably.

Alas the buoying that my spirits got from organizing this event was kind of short-lived. I am offended that my elected representatives are reading and watching movies and just following the command to vote no to every single amendment. I am outraged that any and all opposition to this bill is characterized as merely delay. This is what the man who works out of the office shown in the second photo said to our local paper yesterday:

"The opposition parties are trying and will continue to organize public rallies using people that support their side and people that would join them in a 'No' vote in every part of the budget." he said, adding the governing party could do the same. "But those folks are all busy working and earning a living and raising their families and trying to make their lives as good as they can."


Almost all of the above folks came to these protests on their weekends and after a hard day's work. Some of them spent the day caring for their children or elders. Every single one of them is trying to make their lives as good as they can, and the lives of others, besides. It nearly broke my heart to read that and to think of all these committed caring people dismissed so easily. I phoned the man. Told his poor assistant what I thought of his lousy quote. Informed him that I organized these rallies in my time off from the job in which I earn a good living and paid quite a few taxes, including his salary, thank you very much.

Yes, despair pretty much all I had the last 17 hours. And then a link in my blogroll sent me to Framed In Canada where I saw this video (also available in french):