I have this philosophy that the universe puts opportunities in your way and that it is important to say yes as much as you can, because otherwise the universe stops sending opportunities. This is how I manage to have done so many weird things in my life. The weird thing I am doing now is building sets for the local professional theatre. Of course, being the set carpenter at this moment also turned into being the light tech - always say yes to opportunities.

But this post is not about any of that. This post is about the beautiful, powerful and moving play that I  had the privilege of light tech-ing for in its local run.

The play is Jake's Gift. It is the story of a WW2 veteran who returns to Juno Beach for the 60th anniversary of D-Day to find the grave of the brother he lost in the campaign. He meets a local ten-year-old girl and their three day friendship changes them both forever. It is ostensibly a play about remembrance, but it is so much more.

The play is a triumph of simplicity. It is a single act, approximately 70 minutes long; the set is spare: a bench, a table, a suitcase and a cardboard box; The light design is simple, conveying two separate locations without the need for walls or level changes; There are short snippets of period-specific music used to punctuate the character's thoughts; There is one actor: the playwright Julia Mackey performs all four characters.  There are monologues to establish the characters and then dialogue between the characters. Each character has a separate voice and posture, and each is identifiable from the others immediately. Mackey moves between these characters absolutely seamlessly, managing to be all four characters reacting to one another.  As the light tech, I watched this play for 24 performances, and Jake, Isabel, Isabel's grandmother, and Susan, the teacher from Canada, were distinct and real people to me every single time.

Everything in the play fits together. There are words and concepts that circle back and re-echo throughout the play.  The maple leaf, a favourite number, the taking care of  soldiers, gardens, and even Burlington Ontario connect and reconnect so that the play is like a perfect jigsaw puzzle, all of the pieces needing each other.  There are more than 40 places to laugh in the play and a handful that will take the breath out of you. I still wept at the end of performance number 24.

Its publicity talks about the importance of remembrance, but it also makes powerful statements about grief and resolution,  friendship and connection, and for me it also made a case for the arts in troubled times.

Isabel establishes a metaphorical way of thinking about the dead in the opening lines, and the spirits of Jake's two brothers, the one whose grave he has come to find, and the one recently died in Canada, as well as those of his also recently dead wife and Isabel's great-grandfather begin to also inhabit the play.  They become characters to talk to, perhaps less gone than we had feared, even if they are better listeners than talkers.

Isabel and Jake meet, not by accident, but because Isabel's grandmother has taught her about the war, what it was to her, and why Isabel should remember these soldiers who died so far from their own homes, sparking Isabel's compassion and her curiosity about the living Vets. She makes the first move, and while Jake is initially resistant to her overture, her open and accepting manner win him over. Through Isabel, his grief and regrets about the losses in his life are transformed. Jake and his gift give Isabel tangible connections to her grandmother's and Jake's memories.

Jake does not talk about battles. He talks about the dance halls in England opening at 10 in the morning, with huge orchestras playing, to give the young soldiers something to do while they waited to go to France.  He talks about dancing with the pretty local girls. He talks about "dancing their feet off because they knew they were going some place where they might not come back."  He talks about the trumpet that transformed his brother, and how he learned more about his brother because of that trumpet and the dance halls than he had at home. This was to me, an extra message in the play: The arts make it bearable. The arts help us cope. It is the arts that help us connect - witness: wives met in those dancehalls.

I confess that beyond the fact that I really like theatre and plays, I was not especially enthusiastic about this play. I'm mostly a pacifist, and I am deeply bothered by the use of our healthy citizenry as cannon fodder for useless wars. As such I have never been much of an attendant, never mind participant in Remembrance Day ceremonies and such. I buy a poppy every year to support the legion and the vets, and I wear it, but that is it. I knew that D-Day on Juno Beach was about the liberation of France, but I did not understand what that meant. I did not understand the very real, personal and immediate threat that France was living under.  Yes, I know, the Nazis were beyond horrifying, and I cannot imagine what might have happened if they had won, but I did not really get it.  Jake and Isabel and her grandmama drew the reality for me  in only a very few lines and gestures, and it knocked the breath out of me performance after performance. I'm a bit ashamed of my previous attitude, and glad that I understand better now.

I think art should move you. Jake's Gift moved me to tears. Over and over. And to laughter, which I think is imperative for a bearable life.  But more, it moved my ignorant viewpoint to one of understanding, really truly understanding, that ultimately, what matters in life is doing something for someone else. 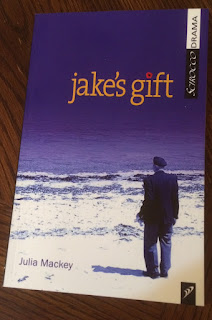 Jake's Gift will play in Lindsay Ontario, Hudson Quebec and Guelph, Sudbury and Gravenhurst Ontario between now and the end of November.  I cannot recommend this play highly enough.
(And if you go, and you get the chance, say hi to Julia and Dirk from Karen. They are my favourite actor and director in the whole of the world.)