Yes I know its late.  This is going to be my new thing. I am going to post on everything after the fact.

We had 26 trick or treaters this year, which is 25 more than last year. We had minions and zombies and Iron Man. We had kindergarteners and teenagers.  Everyone said thank you.  It was fun while it lasted.

It made me think of Bandit. 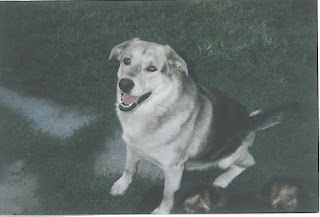 Bandit was a husky/heeler cross, which meant he was smart but oh so stubborn.  He was also gentle and he loved children. But he was terrified of fireworks, which made Halloween a terrible mixed blessing.  He loved to go to the door to inspect the costumes of the trick or treaters, which if he was allowed also included tasting ears. He must have found ears delicious, because he licked everyone's ears he could get near.

Bandit's best friend was a shepherd/rottweiler named Kodi, who also liked to see little kids but he also thought there should be treats for dogs, if we were doling out stuff, thank you. 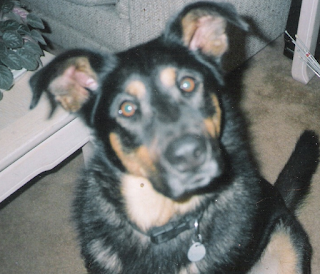 One particular Halloween, there had been a lot of fireworks really nearby, and they had started early in the evening.  Poor Bandit was practically attached to my knee.  I couldn't make him go away, because he was so frightened but I was getting kind of exasperated.  And then the baby bear arrived at the door. He was three or four, and he had the sweetest round brown eyes I have ever seen on a little boy.  He was with his dad, who was just a man in a ski jacket - not a bear,  and he loved dogs. He saw Bandit just behind me, waiting to check things out and exclaimed, "Oh! A Puppy!" Which Bandit took as his cue to muscle by me to do an ear examination. Kodi danced around behind me, wanting to get in on any fun activity or treat that happened to be going on.  I told the little boy, in my exasperation with all the dogdom going on in the small space and poor Bandit's mental health that evening, "That is not a puppy. That is a chicken in a dog costume."  The baby bear stopped giggling and petting Bandit and eyed him critically. "Really?....Then.....Is that a dog?" he asked, pointing doubtfully at Kodi, behind us.  I don't remember any of the rest of the exchange, but I often wonder what kind of conversation that boy and his dad had after they left my house.

Nothing fun like that happened this year, but that's okay.  It was fun anyway.