The Hand That Feeds Us...

The Sea to Sands Conservation Alliance had a little gathering.  We started at 5:30 pm in the parking lot of the Enbridge office, which, by the way, has no signs identifying it and has 2 surveillance cameras on each side of the building.  That's it in the left of this picture. 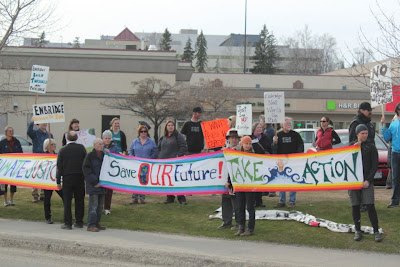 There were some DIY and waste reduction demonstrations going on at a local community space a few km away, so we walked there together with our signs.  We walked on the main street that runs through town and we got quite a few honks and thumbs up.

The Liberal campaign office happens to be on the way, so we thought we would stop and say hello.  We had big cards for our local liberals asking them to join us in defending our coast.  We had called the office to see what time they close and we were told 7 pm.  We arrived around 6. 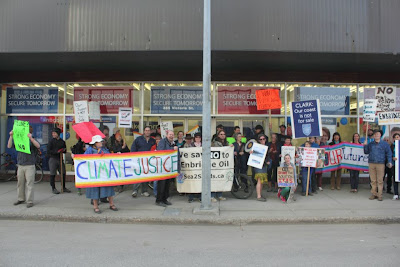 We took a few pictures and then a member of the group tried to go in and say hello and deliver the cards.  The doors were locked, and they forgot to turn the sign over. 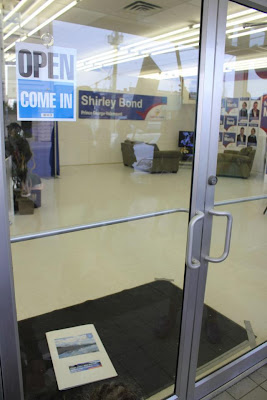 So we just left the card.  As we were about to leave, a Liberal supporter or volunteer arrived with doughnuts.  As she was approaching the door she said, "biting the hand that feeds you, are you?"

We were not confrontational with her, and we told her we thought it was rude of them to lock her and her doughnuts out, wished her a happy Earth Day and continued on our way.  I meant to go back before 7 to see if they unlocked the door, but I was having a rather nice time at our celebration and I forgot.

The Liberal whose sign can be seen in that last picture was once upon a time a School Trustee.  She was the trustee for the elementary school the Offspring attended. Said school was about 100 years old and it housed the neighbourhood public school,  the Programme Cadre French program, and the YMCA's daycare.  We had a thriving community association.  It was a beautiful old school.  (remind me sometime to tell you about the aesthetics, or lack thereof,  in Atmon) It had 12 foot ceilings and soaring windows. It had tall raised panel doors with transom windows over them.  It had wide hallways   and some wood floors.  It had character.  Beginning around 1990 the district stopped doing major maintenance to the school and it was beginning to suffer.  It had an old boiler that was not being properly maintained, its paint was chipped and peeling  and they stopped replacing windows.  The floors were not getting regular maintenance. It looked kind of slummy if you didn't love it.  (Aside: I also attended this school when I was 10.) In 1996 the district started trying to close it.  One of its infuriating arguments was that it was going to be too expensive to perform all the necessary repairs and maintenance.  The district's stated objective was to have a few superschools and close most of the neighbourhood schools.  We started a group called Save Our Community Schools, and we fought hard to keep our school and the others open.  All the community schools were housing other programs and I think we all had programs that brought in some revenue, like the Y in our school.

Having Programme Cadre in the school was so wonderful.  We shared all our celebrations and in the english program we had the opportunity to learn about Quebec culture.  One of the celebrations we looked forward to every year was Carnivale, which gave us a whole week of fun activities, beginning on Monday with a pancake breakfast.  We invited our trustee to breakfast, and to show her all the wonderful things we were doing in that school.  I will never forget greeting her and welcoming her and thanking her for coming.  She had brought two men with her, and she was shaking as she took my hand. She did not meet my eye.   She was not gracious.  She was not friendly.  She did not make any attempt to engage with any of the parents or the children.  I thought then, and I think today that she is a coward and a small, small human being.

We meant no violence, no harm whatsoever in visiting that office.  Some of us are constituents.  But we are certainly not represented.  Everyone at our rally cares deeply about the planet and our ability to exist on it without destroying it.

I have to wonder, who is biting who?

h/t to my friend Adam for the pictures