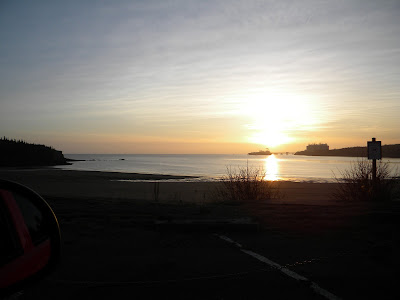 That is Mispec Beach on the Bay of Fundy in New Brunswick.  I took that picture on December 26, 2012.  My partner is a BC transplant from New  Brunswick and my Offspring is a student in Nova Scotia. We decided to spend Christmas on the east coast this year. I spent a few days in Nova Scotia with the Offspring and then she and I  drove to Saint John to spend Christmas with his family. It was lovely. We walked all over and I took hundreds of pictures and my partner and his uncle told me all about the history of the place.

But this post is not about my trip. This post is about the credibility of the words of certain people and bodies.

In the right of the photo above are three large tanks.  They are part of an LNG terminal. When Irving was looking for community support to put them there, they asked for support for one tank and possibly a second in the future.  My partner is a carpenter.  He knew carpenters who built the concrete forms for the pads on which those tanks sit.  Two pads were built, and the rock was blasted out with crushed rock  in place and levelled for a third, before the public meetings were complete, before the community agreed to even one tank.  Someone from the LNG proposal stood in front of that community and promised that there would only ever be two tanks. My partner stood up and asked why there were two pads and preparations for a third. Just in case, he was told. My partner called the man a liar and the liar took heated exception. My partner said, you are going to put three tanks there and I do not support this project. But a whole bunch of good people did, and there they sit. Three tanks, where they promised there would be one.

I live in Canada where a reformer is a Conservative. Pardon? I watched as SH put a creepy smile on over his spots and asked a whole country to disregard the terrible disparaging things  he had said about the people in this country. I watched sadly as a whole bunch of good people did.

I live in BC where a socred is a Liberal. Pardon? I watched GC put a plaid shirt on over his spots and ask the province to believe his spots were gone. I watched sadly as a whole heap of good people did believe him.

I live in the north, where Enbridge is trying to tell us that 60% of the First Nations support the pipeline and that it is a straight shot from Kitimat to the Ocean (Perhaps Enbridge magic has transformed those missing islands into First Nation's supporters). Happily, I see people questioning this. People. Not institutions, not media, but people.

So there I am, sad and fearful and deeply skeptical. But hopeful too. Because I am involved with the Enbridge opposition, and I support the Idle No More movement, and these are people who are questioning the status quo, and demanding better.  And they are starting to make a lot of noise.